Contact us to order a copy of the book 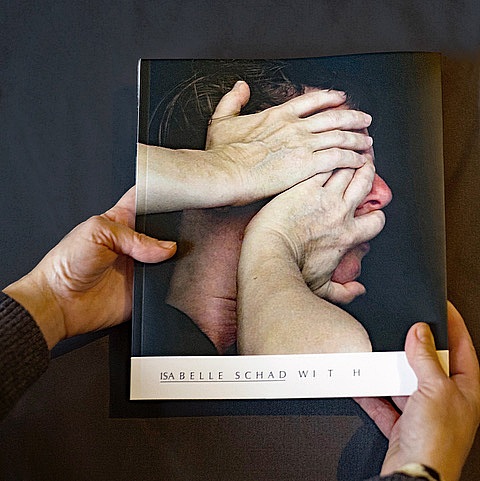 Isabelle Schad WITH is a book which compiles the last ten years of artistic work by the choreographer Isabelle Schad. The idea, time and resources for this undertaking arose in the exceptional condition of suspension dictated by the pandemic: at a time when theatres and rehearsal space became suddenly inaccessible, when it wasn’t possible to work as usual, we decided to explore new possibilities and modes of operating, to delve into a ‘new space’ inhabited by language, images and new and long-term collaborators. 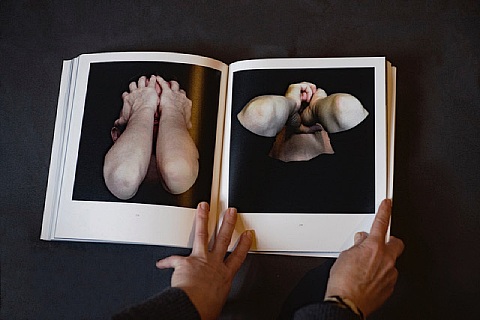 This book compiles the last ten years of artistic work by the choreographer Isabelle Schad. The idea, time and resources for this undertaking arose in the exceptional condition of suspension dictated by the pandemic: at a time when theatres and rehearsal space became suddenly inaccessible, when it wasn’t possible to work as usual, we decided to explore new possibilities and modes of operating, to delve into a ‘new space’ inhabited by language, images and new and long-term collaborators.
Read more

Coincidentally, I first worked with Isabelle Schad ten years ago, at a festival I was co-curating in Genoa, where we hosted Unturtled, the piece that marks the beginning of a long and fruitful collaboration with the visual artist Laurent Goldring.

From then on I continued to follow her work, not only as a theatre-goer but also occasionally taking part in the Open Practice Sessions, a format conceived by Isabelle as an invitation to share her practice. This was an opportunity for me, as a curator and dramaturge, to familiarise myself with her artistic universe from a new and unusual perspective, to witness not just by watching but by doing.
And as a witness of these last ten years, I sense that the different works created during this time, together with their underlying practice, constitute one living body, one ‘organism’, made up of intertwined and interdependent threads of meanings, gestures, energies and people, weaving a line of continuity, coherence and resonance through time and space.
.
This weave constitutes the fabric of Isabelle Schad’s practice: a patient, persistent, horizontal, rhizomatic and ecological practice that goes beyond fashions and trends to remain true to the principle that inspires it: the search for the essence of movement, on stage as in life, and to paraphrase Annemie Vanackere, the search (still unfinished – because unfinishable) for the innermost sources of movement of and in the social sphere.
.
This search has been nourished over time by embryology and somatic practices such as Body-Mind Centering, as well as by aikido, zen, shiatsu and voice techniques – multifaceted approaches that tend towards a common point: the overcoming of dualisms and binary ways of perceiving, thinking and moving. The dance, as it appears to us from the ‘outside’, emerges from a profound search for the ‘inside’ and is one with it. This uncompromising approach to movement informs how we see it: a poetic, sometimes uncanny beauty emerges that goes far beyond the form, the appearance; an ‘inner gaze’ is activated, as Andrej Mirčev maintains in this publication, that transforms the experience of looking into something visceral and contemplative. ‘Contemplation’ comes from the latin con (with, by means of) and templum (a portion of sky).
.
The priest, the augur, who in ancient Rome questioned the gods to know their will through the flight of birds, would raise the lituo, his sceptre, and with a broad hieratic gesture circumscribe the portion of the sky he would observe. Through this contemplation he would determine whether or not the deities liked a choice made by humans.

By extension, ‘to contemplate’ means a watchful, absorbed way of seeing, spiritually driven and open to wonder. I like to think of the stage as a templum, where ‘small miracles’, to quote the choreographer herself, can happen.

Back to this object you are holding in your hands, and given the premise of such an intense experience for the spectator in the liveness of the theatrical moment: does a book about dance represent an oxymoron, a denaturisation, where movement is transformed into an image, feelings into words?

If it is true that dance, as a live art, lives in the present and is essentially resistant to any kind of documentation, it is equally true that dance needs places of preservation and care, not only for the sake of the work itself but also as a gesture of generosity and sharing.
So this book is intended to add to those still too rare books on choreographers, on dance as an artistic field, that put choreographic work at their centre and present it in ‘another’ form, making it available to a wider public.

Part of the effort of the editorial team behind this publication – consisting of myself, Isabelle Schad and Annette Lux of the HIT graphics studio, supported by Isabelle’s long-term project manager, Heiko Schramm – lay in creating an evocative, dynamic and haptic space where the sensuality of the images is supported and enriched by the written word.

Another priority was to account for the human and professional constellation which has been the connective tissue of the work over the years: a network of relationships continuously woven and kept together by Isabelle Schad over time, despite the endemic insecurity and the project-based working mode that characterises the independent scene.

Many representatives of this constellation of people can be found within these pages in various capacities; the ‘with’ of the title is accordingly a tribute to this immanent and open relationality.

The authors range from close and long-term collaborators, such as the lighting designer Bruno Pocheron, the dramaturg Saša Božić, the dancer Przemek Kamiński, the aforementioned visual artist Laurent Goldring and myself, to theorists and writers who have followed Isabelle Schad’s work for many years, such as Susanne Foellmer and Gabriele Wittmann, or others who have recently discovered it, such as Andrej Mirčev. They also include representatives of institutions that have continuously supported and shown Schad’s work, such as the director of the Hebbel am Ufer theatre, Annemie Vanackere. Various voices, therefore, offering a variety of perspectives and stylistic registers.

The book’s images, largely unpublished, are by the experienced dance photographer Dieter Hartwig, by Laurent Goldring – to whose collaboration an entire section of the publication is dedicated – and Isabelle Schad herself.

Schad’s authorship is also present in various texts and interviews that offer direct, unmediated insight into her cosmogony. A special feature is the conversation with the aikido master Gerhard Walter, a very important point of reference for Schad’s life and work in recent years, who introduced her to a specific approach towards ‘natural movement’.

The script of Fugen – the only piece by Schad that contemplates language and spoken words – provides an autobiographical narration, and it is the only text that has not been translated, to adhere as much as possible to its oral character, in an otherwise entirely bilingual publication.

Informed by a similar intention toward the original voices of the various authors, each text has been published in the language in which we received it: English or German dynamically alternate in the book, while an appendix at the end collects the corresponding translations.
To conclude this introduction I wish to extend a genuine invitation to the reader: do inhabit this space we have created by navigating through it with open senses; do contemplate the images and feel the words; do become part, by weaving a personal thread into its texture, of the ‘withness’ of the title … until the next time we meet in the theatre.

Isabelle Schad WITH: Printing Dance, Describing Dance
Recently, the Berlin choreographer’s dance brigade fits between two book covers. Shortly before the end of the year, a retrospective of her work was published, looking back over the last ten years. The numerous projects fill much more than just pages. A recommendation.
Read more

She works with soloists, choreographs groups or takes to the stage herself: Isabelle Schad is an established name in the Berlin dance scene.

She has made a name for herself far beyond the city’s borders and has won numerous prizes. Her finely crafted projects offer a unique aesthetic made up of body language and movement.

The contrast between light and dark
Contrasts play a major role: light bodies against dark backgrounds, stripped of disturbing clothing, from a moving single act to a teeming group picture, following their own rhythm, amazing mechanics of arms, legs, hands, feet, heads and hair.

Now a printed monograph has been published that offers a beautiful overview of the diverse works of her artists and groups. Beautiful because the imagery of the large-format photographs echoes and condenses the typical aesthetic of Schad’s stage works.

An idea from barren times
Printing dance is as difficult as writing about dance. It is only about the catalogue, not about the works on stage. The idea for the monograph was born at a difficult time, when Corona was closing its dance theatres. The fact that the catalogue was finally completed is a testament to the perseverance of the artist, her collaborators and fellow artists.

The book is an enrichment. It complements her presence on stage with an exciting presentation of her choreographies from the last decade. The result is a successful mixture of photos and texts. It is a feast not only for the eye, but also for the brain.

Those who do not know Isabelle Schad’s work will be inspired by this book. There is no doubt about that. And for those who are already familiar with her work, the images and descriptions will deepen existing impressions.

Collective creativity as a red thread
The idea of collective creativity is particularly striking. It runs like a red thread through the book and the projects presented in it. The title Isabelle Schad WITH outlines the aspirations of the choreographer, who always sees herself as a team player. In the past one would have said folk art collective or dance brigade. The I takes a back seat to the WE, in all modesty.

In this way the monograph becomes a bit like a brigade diary, it comes alive because it focuses on the creative process. It is not primarily about the final presentation on stage, but about the continuous creation of choreographies in the group. Sometimes the team consists of just you and/or a soloist. Sometimes there are twenty artists floating around the room.

The list of participants is long, very long. Nevertheless, the catalogue appears to be a unified whole. Fortunately, all the texts are in German and English. The first-class photographs, of course, need no translation.

Schad’s choreographic style is understood worldwide, even without words. To sum up: printing dance, describing dance – this difficult undertaking is more than successful. 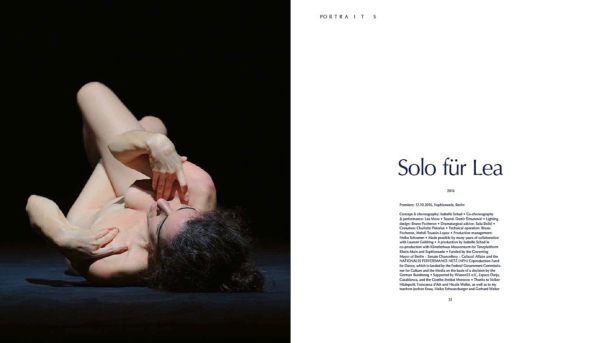 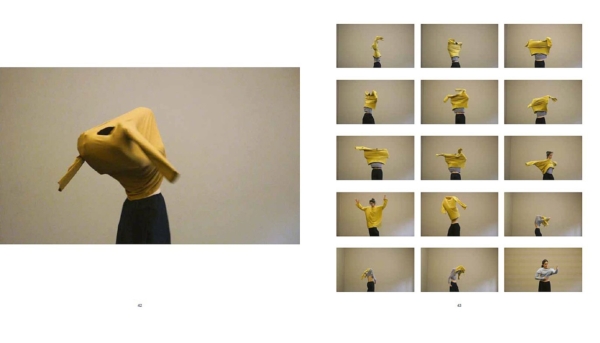 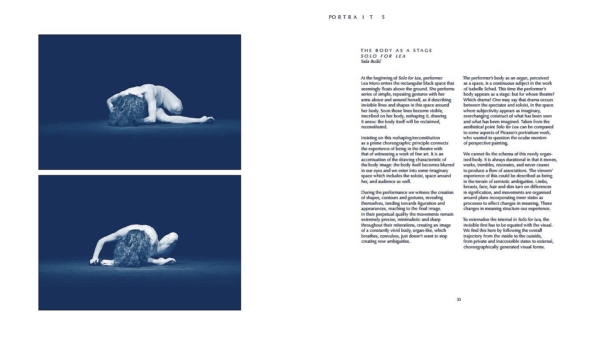 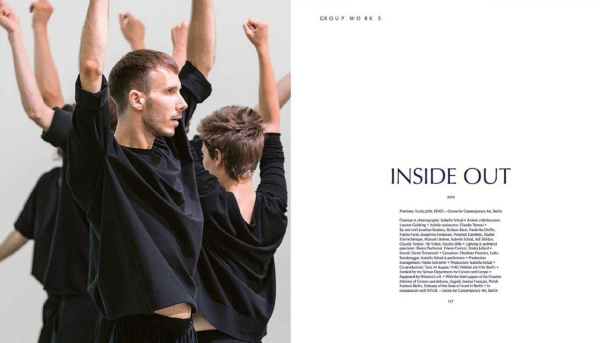 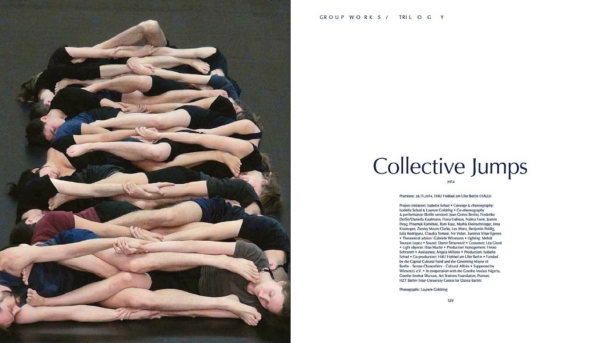 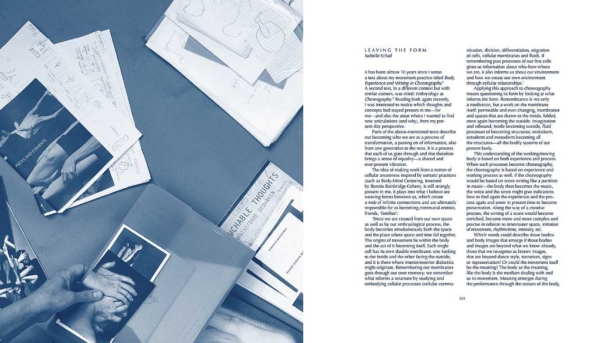