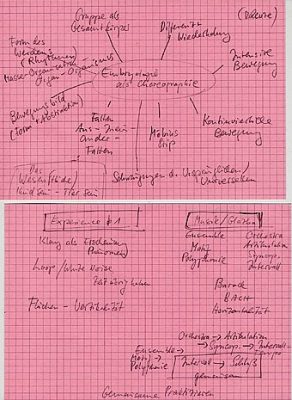 Music can be divided into genres and sub-genres, although the dividing lines and relationships between music genres are often subtle, sometimes open to individual interpretation, and occasionally controversial. Within “the arts”, music may be classified as a performing art, a fine art, and auditory art.Glazba – the Croatian translation for music and score – is a work that searches for comparable ways in writing dance, considering the body as an instrument. Glazba looks for relationships between the visual and the auditory, between musical terms and its translation into body language and aims to compare musical terminology and concepts with physiology, choreographic writing or compositional elements in dance.

Read more
The overall concept is thought as a large research field around music, out of which different pieces can be created – each of them will be titled Music, translated into the respective language of the country where it will be created and presented. A concept that ’meets’ different people from different cultures, backgrounds, countries and that results each time in a new and different kind of work in regards to the participants’ respective histories.Within that concept we are focusing on and questioning issues like: the relations between body practices and choreographic works, the presentation of bodies in activities to be looked at and the proposition of a shared time involving the spectator’s personal experience, emotions and imagination. Glazba thus deals with modalities of working and thinking and their effect on (re)presentation. 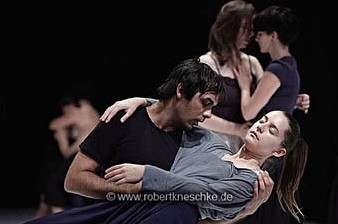 “The notion of looking back into the possibility to dance like music or even with music has been very curious to me, and after years of working in the field of conceptual dance and performance this project brings me back to the very essence of my questions: how to be able to propose the (dancing) body in the more plain way as subject to be looked at? What are those connections between visual and auditory, between seeing and hearing, conducting and painting?Glazba is a search for the motivations and origins of moving, dancing, being there in present time and how this can relate to music, sounding, vocalising, breathing, being there again…The notion of creation becomes somewhat relative to the learning process that we have been starting to share within 7 weeks throughout one year.This learning process is based upon practice, body practice, in which we are studying complex physiological processes (like embryology) that make us reflect upon space, environment, relationship, self, other in so many ways; that make us look at the creation of a piece as a softening process, as allowing to come forth with such a process. And then: is it an inside or an outside learning? How can experience make us understand or learn anew? See anew? In order to forget the images that we know already, we need to find new images, but then those new images can become again ’fixed’ images that we need to forget so that we can learn again, see again. In order to reconsider ’form’ we need to look into what ’in-forms’ the form.The question that appears then is: How to share those experiences in the frame of a public performance. What can be shared, where is meaning emerging and is there a space for the one who is watching to construct his/her own and personal experience, with those kind of associations, images, emotions that connect to each person’s own (hi)stories.Can the position of the conductor, the painter and the spectator be one and the same and how can this painter who has been painting disappear through the crack of a door in the image…” (Isabelle Schad)

Selma Banich, artist, activist and a happy housewife, lives and works in Zagreb. Co-founder and program coordinator of ekscena, prize-winning platform for education and research in performing arts. Author, performer and founder of OOUR, Zagreb based collaborative performance group. Artistic collaborator and performer with Trafik, DB Indoš – House of Extreme Music Theatre, Sodaberg, k.o. and Every house has a door, Chicago based collaborative performance company. When not working in theater, she lives a simple life of an admirer of nature, mankind and Web 2.0.

Nino Bokan is a mono-company. He is interested in various subjects, since he is dispersive and thirsty. Sociologist and philosopher in the making and a body in movement. Hedonist by vocation, lives in Zagreb, oscillating and looking for more.

Saša Božić, theatre director and dramaturge, active in the field of European contemporary dance. As a dramaturge, he has collaborated with prominent choreographers in Croatia and abroad, such as Isabelle Schad, Simone Aughterloney, Francesco Scavetta, Martina Pisani, and Dalija Aćin, and authored several awarded performances by Zagreb Dance Ensemble (Stripped and Same) and New Life Theatre (Nos Vamos a ver). His joint project with Belgrade artist Dalija Aćin „Handle with a great care“ won the first award of Jardin d’ Europe at Impulstanz Vienna, the most prestigious dance festival in Europe (2008). With his theatre projects, he participated at various festivals in Croatia and abroad. Currently working on several collaborative projects in European theatres such as Hebbel am Ufer in Berlin, Kaaitheater in Brussels, Pact Zollverein in Essen, Gessnerallee in Zurich, National Dance Centre in Oslo and Belgrade Dramatic Theatre. In 2009 and 2010, he produced auxiliary and all-year programmes for Eurokaz. Head of the performance group de facto together with Barbara Matijević.

Marko Kalc was born in 1989. He began his dance training at „Prostor Plus“ in Rijeka and became its member in 2008. He completed his training at MAPA (Moving Academy for Performing Arts) and Nomad Dance Academy. Author, co-author, and performer in numerous projects.

Nikolina Komljenović is a performing artist at Aruša Theatre. Autodidactic and alternative training in the fields of circus, dance, and theatre. About to graduate from the Faculty of Philosophy in Zagreb. Author, performer, presenter, and traveller.

Rina Kotur is a dance artist born in 1981 in Zagreb, where she is currently based. She obtained her formal training at School for Contemporary Dance Ana Maletić and the Psychology Department at Zagreb University, as well as at Nomad Dance Academy. She has had many years of professional dance experience with theatre companies such as Kelkope, Trupa To, Dance Lab Collective, Montažstroj, and TALA). Winner of the First Award of the Platform of Young Choreographers in 2006, for the performance Seesaws. Dance pedagogue at the Art School Franjo Lučić, Velika Gorica.

Nina Kurtela is an artist currently living and working between Zagreb and Berlin, reflecting and creating between the visual and performing arts. Having graduated from the Academy of Fine Arts in Zagreb in 2008, she completed her studies at the Ernst Busch and UdK academies in Berlin, where in 2010 she obtained a diploma of the pilot project on Contemporary Dance, Choreography, and Context (Cooperative Dance Training Centre – Tanzplan Deutschland). Since 2005, she has had a number of solo exhibitions and collaborated on various art projects in Croatia and abroad.

Marko Jastrevski is a dance artist born in 1984 in Karlovac. He obtained his dance training through workshop programmes with Croatian and international teachers. In 2008, he was on scholarship with Nomad Dance Academy. As a performer, he participated in performances by Željka Sančanin, Saša Božić, Zlatko Burić-Kićo, and Martina Pisani. Author and performer of the dance solo Garbage Epic.

Maja Marjančić, born in 1977, dancer. Coordinator of Experimental Free Scene since 2005. Graduated art history and Hungarian philology from the Faculty of Philosophy in Zagreb. Since 2007, she has worked as an assistant for stage movement at the Academy of Dramatic Arts. As a dancer, she collaborated with various choreographers in Croatia and abroad (Martine Pisani, Isabelle Schad, Ksenija Zec, etc.). Currently lives and works in Zagreb.

Sonja Pregrad graduated dance and choreography in 2005 from Arnhem Dance Academy and continued her training at SNDO in Amsterdam and the Rotterdam Dance Academy. Active as a solo author, performer, and pedagogue in Croatia, occasionally also in the Netherlands, Germany, Slovenia, Italy, Finland, USA, and Austria. Since 2007, she has co-organized IMPROSPECTIONS – International Encounters of Improvising Artists – together with Zrinka Šimičić, Boris Barta, and Iva Hladnik.

Ivana Rončević is a dance artist, born in 1982 in Vukovar. She obtained her training at the Art University Berlin, graduating from the BA Pilot project for Contemporary Dance, Choreography, and Context (Collaborative Dance Training Centre – Tanzplan Deutschland). In 2009, she graduated from the Faculty of Croatian Studies, Psychology Department. Since 2004, she has been involved in various professional art projects.

Karolina Šuša (born Šuša) was born in Opatija on 29 January 1985. By the time this booklet is published, she will have hopefully graduated Comparative Literature and English Studies from the Faculty of Philosophy in Zagreb. Actively dancing since 2004. Co-author and performer of several outstanding pieces. Loves rainy afternoons and long walks through the woods.

Martina Tomić was born in 1983 in Zagreb. She graduated journalism and obtained her dance training at the School of ZKM, Zagreb Dance Ensemble, Studio for Contemporary Dance, and numerous workshops of contemporary dance in Croatia and abroad. Since 2006, she has been active as a dance artist, collaborating on numerous projects by Liberdance, Zpa, Montažstoj, Tala, and ekscene. In 2009, she enrolled at the Teacher Training Programme of Gaia Yoga at the Sangha Yoga Studio, and currently offers yoga classes.

Ivana Vratarić was born in 1983 in Zagreb. In 2010, she graduated from the Academy of Fine Arts in Zagreb and specialized painting in the class of Damir Sokić. She has actively and extra-institutionally danced since her childhood. Since 2004, she has participated in various projects in the field of contemporary dance and lately she has also become involved in the multimedia.

eksceneExperimental Free Scene is an independent organization founded in 2001, with the aim of promoting and affirming contemporary dance and other fields of performing arts. With its open organizational model and working mode, which presupposes horizontal decision making and sharing responsibility, it seeks to motivate artists to create new themes in accordance with their own interests and needs. Through its Working Platform, ekscene organizes everyday dance training, workshops, residences, auditions, lectures, and presentations, supports artistic projects, and launches and runs its own projects, as well as projects in collaboration with other artists, associations, and cultural organizations. By initiating its own programmes and projects, or collaborating in others, the organization seeks to emphasize the importance of developing the performing arts, both within the cultural context and within the civil society in general. ekscene is actively involved in the activities of Clubture network as its member and co-founder, as well as in those of the Alliance Operation City (former Alliance for Independent Culture and Youth Center). It has won the first annual award of the Croatian Dance Artists Association for its exceptional contribution to the development of the Croatian dance scene.