Shiatsu (Jap: “finger pressure”) is a form of Japanese bodywork derived from traditional Chinese massage (called Anma). At the start of the 20th century, different forms of energetic bodywork and manual therapy were combined and united under the name Shiatsu, in order to dissociate from other massages that were more related to wellness or relaxation. Later on, Shiatsu was linked to Traditional Chinese Medicine together with the teaching of the five elements and the function of the 12 meridians (i.e. energetic pathways through the body linked to their respective organs). The five phases of change, or elements, are water, wood, fire, earth and metal. Literally translated Shiatsu means “finger pressure” but the treatment involves much more. For each touch the whole self of the practitioner is engaged and present. The Shiatsu practitioner is not working with muscle strength but rather with their own body weight, and in the course of the session establishes an energetic connection with the client, aiming for balance on a body-spirit-mind level. A person is seen in their entirety, therefore any division between body and spirit is irrelevant.
Read more

In Japan, the most common form of Shiatsu is the so-called Namikoshi-Shiatsu. Outside Japan it is Zen-Shiatsu, developed by Shizuto Masunaga. S. Masunaga brought Shiatsu back to traditional Eastern medicine and philosophy, developed a more sophisticated meridian system (in comparison to acupuncture), and included physiotherapeutic methods.

Shiatsu is practiced clothed, on the floor or a special futon. Shiatsu techniques include treatments with fingers, thumbs, feet, palms, but also with other body parts such as elbows or knees. The practitioner works from the own centre of their body (Jap: Hara). The meridians are brought to the forefront by assisted stretchings, rotations, circular movements, joint mobilisations. The movements are gentle, rhythmical in flow, and at the same time deep-reaching, energetically focused. Important principles are the notion of leaning (versus pressing), of following (the laying person whilst leading) and of dissolving ego. The Shiatsu practitioner and client are in a mutual exchange which embraces the person as a whole entity; they are not in different positions. Always important is a ’communication’ between giving and receiving, also respect and full attention to the life story of the client.

The Shiatsu practitioner regards the organs in their spiritual and physical function, their contribution to the entire personality, and carefully observes the interaction with other organs. In daily practice with Shiatsu, the work on Ki (life energy) is central: quietness can be perceptible and experienceable within a person who has a present mind. 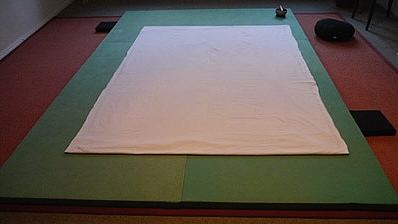